Art of Gold – The Iconic Aesthetic of Japan

Once referred to as ‘the Land of Gold’ by the Venetian merchant Marco Polo (1254-1324), Japan has long been associated with ‘gold’ both as a commodity and for its rich heritage of using this locally sourced material within the visual arts. From refined classics to dynamic 20th century art, this small selection offers a glimpse of such ‘golden’ works produced in Japan.

Screen paintings epitomise the nation’s classic aesthetic in many ways. Traditionally, Japanese people have greatly appreciated nature and the ever-changing seasons, choosing to decorate their grand houses, castles and temples with screens, covered in dazzling gold-leaf and painted with various seasonal subjects. The maple screen from the Hasegawa School presented here offers a case in point. The gold screens such as this work would have reflected the flickering candlelight and were used to brighten the dark rooms of these grand buildings. These gold screens were often given as diplomatic gifts, for example, ten sets of gold screens were selected amongst the gifts from the Tokugawa shogun to King James I of England in the early 17th century.

Buddhist sculptures are another iconic artform often embellished with gold – a body shining with a golden light is counted as one of the 32 characteristics of Buddha. Appreciated for its unrivalled beauty, preciousness and sacred spirituality, gold has been used to decorate many kinds of Buddhist objects and architecture to represent the unworldly, magnificent images of Buddha as well as the ideal Buddhist world. The standing Amida figure presented here shines with a subtle, delicate golden hue – achieved using finely ground gold powder, a technique known as kindei. Differing from the normal technique of using flat golden foil, here powdered gold is applied to the body, giving a soft elegant glow. Together with the use of gyokugan (crystal-inlaid eyes), such treatments were introduced in the Kamakura period in pursuit of enhancing the fleshy reality of the figure as well as maintaining the sacredness of Buddhist sculpture. 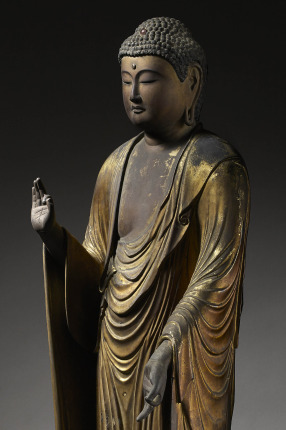 This spirit continued through to the modern era – many artists of 20th century Japan inherited the country’s spiritual and aesthetic heritage and transformed the tradition into something different and contemporary. Morita Shiryu (1912-1998) was such an artist and contributed to radically modernising the art of calligraphy, one of the oldest artforms of East Asia. Being the renowned leader of the avant-garde calligraphy group Bokujinkai (lit: “People of the Ink”), Morita experimented with ground-breaking techniques and materials as shown in his work Dragon (1965). Despite giving the impression of traditional gold lacquer, he in fact applied metallic silver paint with swift brush strokes and later covered them with a coat of yellow varnish, thus achieving a similar effect. In so doing, his work continues the long Japanese tradition of using gold as an aesthetic and at the same time innovates in the ancient art of calligraphy.

Visit us on the TEFAF website and find out more! For further information, please feel free to contact us at info@japanesescreens.com