In this online version of TEFAF art fair we will be introducing the beauty of Japanese screens, presenting a pair depicting conifers and maple under the moon and the sun. 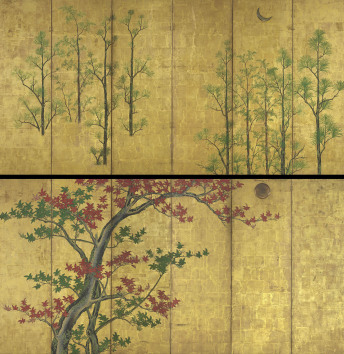 THE BEAUTY OF JAPANESE SCREENS

One of the most iconic art forms – screen painting – epitomises the refined, classic aesthetic of Japan. Traditionally, Japanese people have greatly appreciated nature and the ever-changing seasons and chose to decorate their grand houses, castles and temples with dazzling gold-leaf screens depicting various seasonal subjects.

The folding screen (byōbu) was introduced to Japan from as early as the 7th century. The word byōbu means “enclosure”: byō meaning “a protection against” and bu “the wind”. Originally screens were primarily used for their practical functions, temporary dividers of space, but eventually they became vital in decorating interiors. By the Heian period (794-1185) beautifully decorated screens were widely used in the court and residents of the aristocracy.

During medieval times, circa 14th century, paper-hinged screens, the form we see today, were invented. What made paper-hinged screens so special and innovative is that, without visible hinges which had separated individual panels, the entire surface of the screen could now be used for large-scale, continuous painting. This enabled artists to paint various subject matters in a grand, dynamic manner.

In the Momoyama period (1573-1603) many castles were built in Japan. To decorate these majestic buildings, artists produced large-scale paintings for interior walls, screens and fusuma (sliding doors), often embellished with gold leaf. Paper screens are sturdy but relatively lightweight making them easy to move and store away. The fact that screens were often placed in storage when not in use means that many have survived the common perils of Japan such as fire and earth quake, leaving us with the possibility to continue to enjoy their timeless beauty.

Decoration of screens was developed further during the Momoyama and Edo periods (1603-1868). The background was often liberally applied with gold leaf, which was then enhanced with small gold and silver flakes sprinkled onto the already gilded surface; designs of flowers, trees, birds, animals, landscapes and narrative scenes from history and legend were depicted in ink and bright colours of mineral pigments. The gold screens were used to brighten the dark rooms of these grand buildings by day and at night would reflect the flickering light from candles and oil lamps. These precious, dazzling canvases were often given as diplomatic gifts – for example, ten sets of gold screens were selected amongst the gifts from the Tokugawa shogun to King James I of England in the early 17th century.