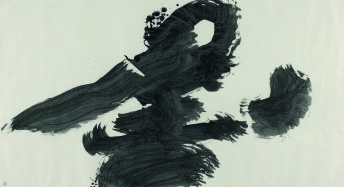 We are pleased to announce our first participation in Frieze Masters London this autumn, holding a specially curated exhibition Buddhism, Zen and the Art of Calligraphy.

Encompassing works of art spanning 900 years from the 11th to 20th century, we bring together both classical and modern Japanese art together with calligraphy within the context of Buddhism and the Zen philosophy. Its spirit has inspired not only Buddhist monks but resonates throughout Japanese art of all periods including the avant-garde artists of the post-war period. We present a selected but diverse collection, from traditional Buddhist sculpture and calligraphy through to post-war avant-garde work, which are all deeply connected to the Buddhist philosophy.

Amongst the early Buddhist sculptures, exemplifying the beauty and spirituality of traditional Japanese sculpture worshipped over the centuries, the highlight is a monumental image of Amida from the Heian period (11th/12th century, figure 88cm high, with stand/halo 134cm high). We believe it to be the only figure of this scale available in the art market at the present time.

Various calligraphy (sho) works from different periods are to dominate the walls, from the classic works by celebrated Zen monks of the Edo period (18th century) to the post-war artists of Bokujinkai, the avant-garde calligraphy group which actively connected with international artists and inspired the schools of Abstract Expressionism and Art Informel.

Visitors are invited to feel the essence of Zen and the Buddhist spirit which have been a source of inspiration for Japanese artists over the centuries by experiencing the meditative space created by such artworks regardles of the media, style and periods.

Frieze Masters “features more than 130 leading modern and historical galleries from around the world, showcasing art from the ancient era and Old Masters to the late 20th century”